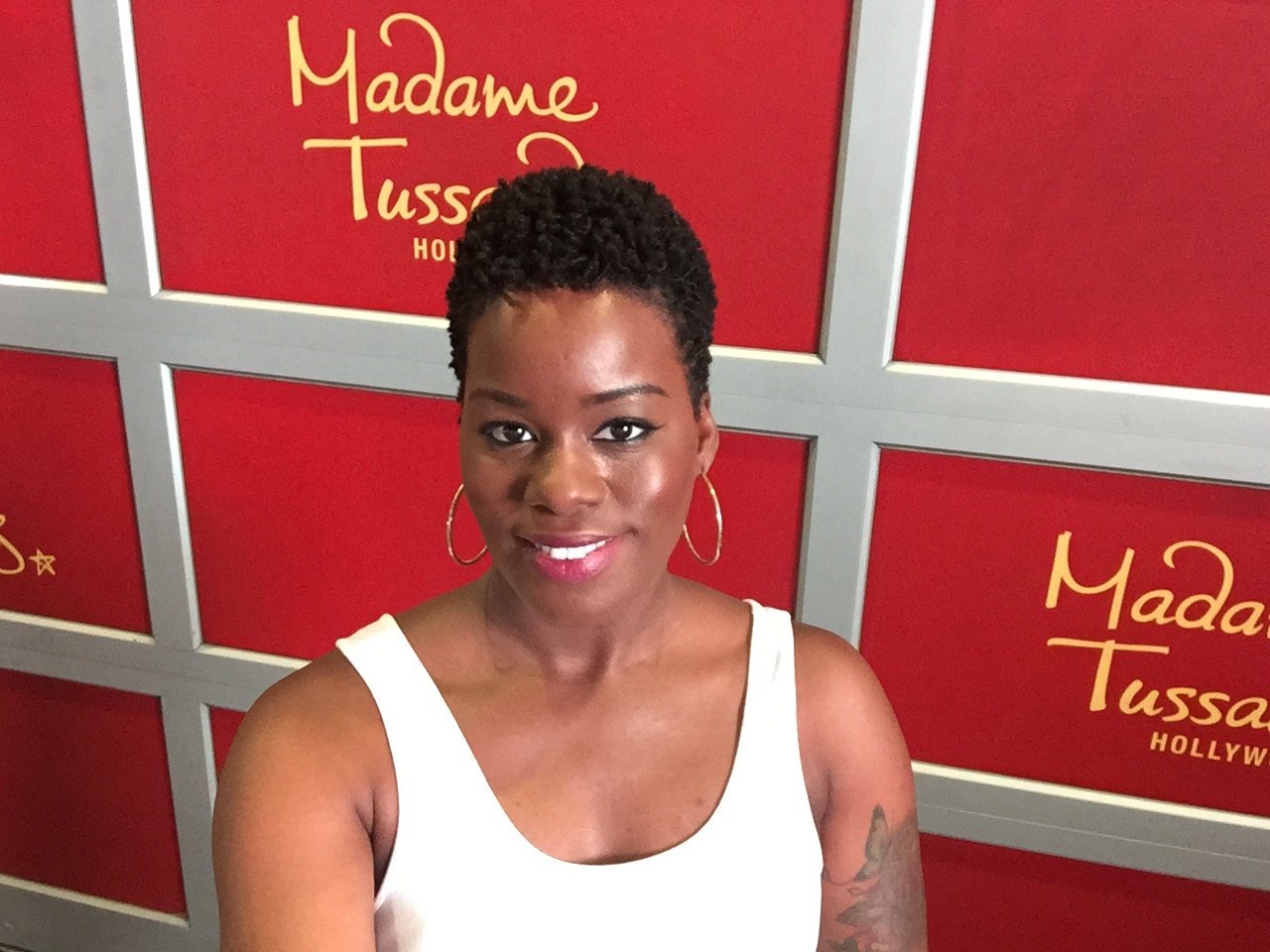 A Day in LA 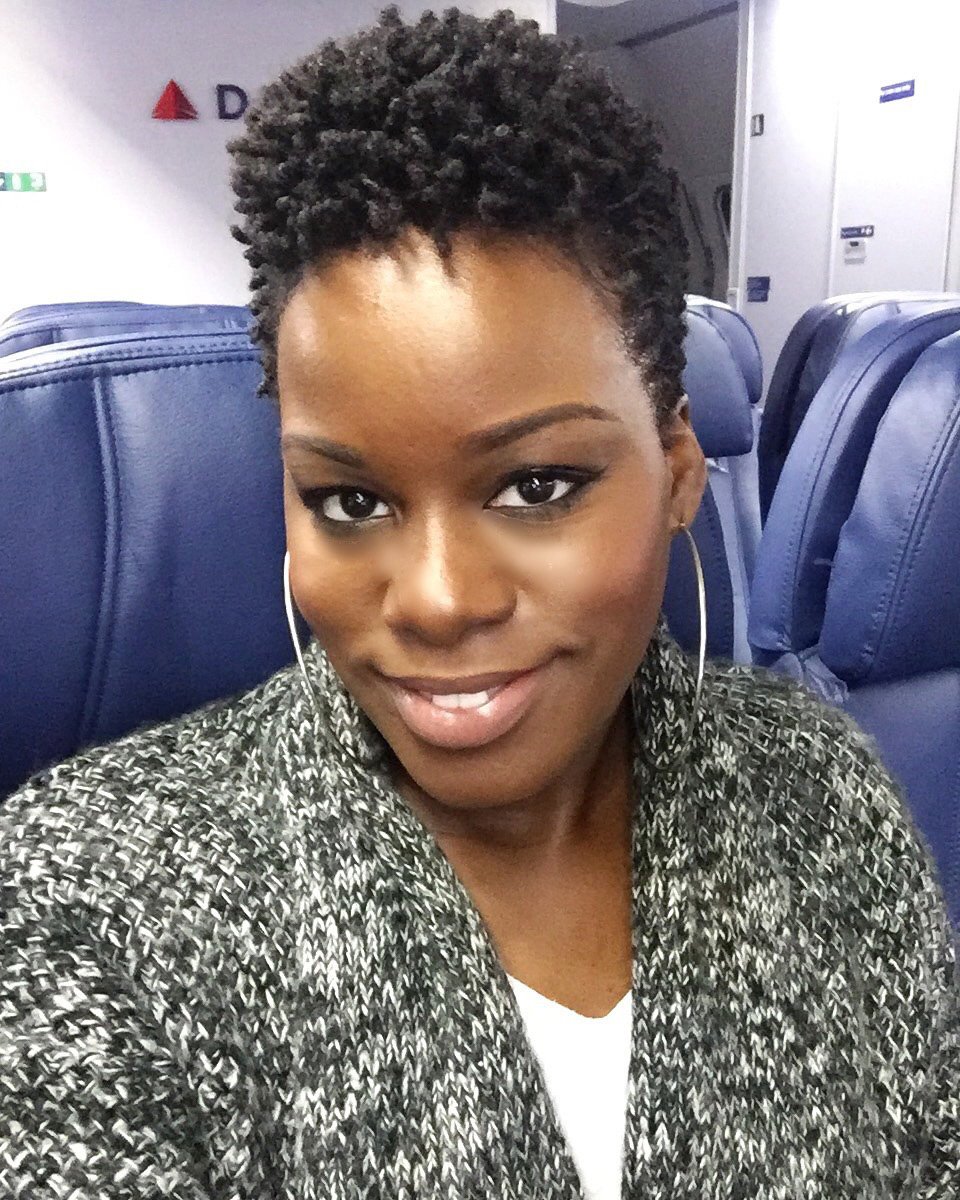 If you’ve been keeping up with my shenanigans on social media, then you already know that last week I flew out to Los Angeles, California to work on a special project. I can’t share the details of the project yet but I can’t wait tell you guys all about it. Until then, here is a recap of my trip. Considering travel time, I only spent one day in LA and half of that day was spent working… but I did get to go out to Hollywood Boulevard and be a tourist for a few hours lol. Warning- since I traveled solo, this post is full of shameless selfies 🙂 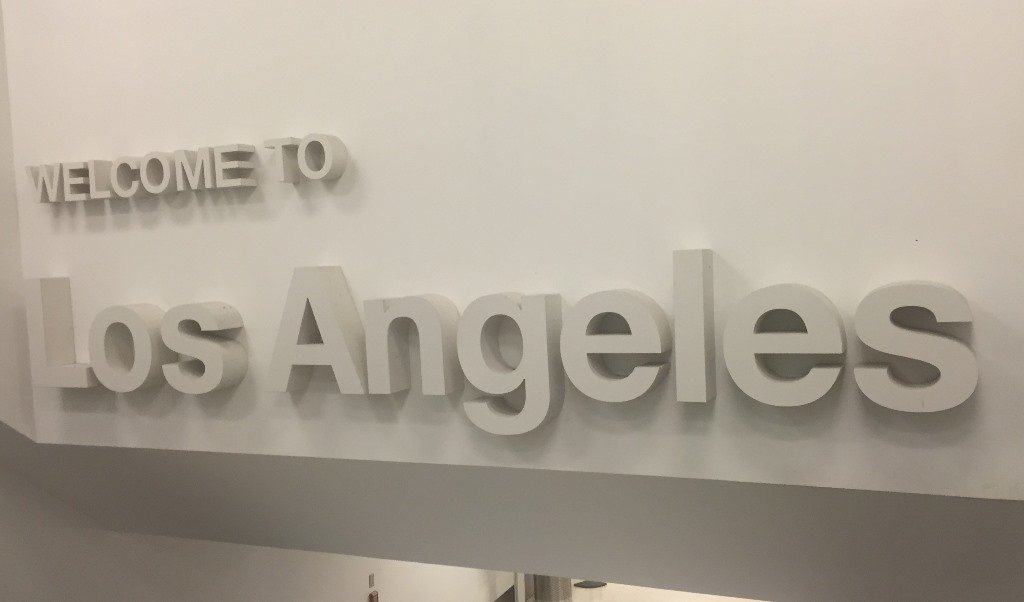 I stayed in the Van Nuys area of The Valley which is about 45 minutes from LAX via the Flyaway Bus, so I arrived at my hotel right on time to grab some food and wine, and catch Empire. Speaking of food, this Penne Alfredo with Grilled Shrimp from the Landings Restaurant was absolutely delicious, and the garlic bread was divine! 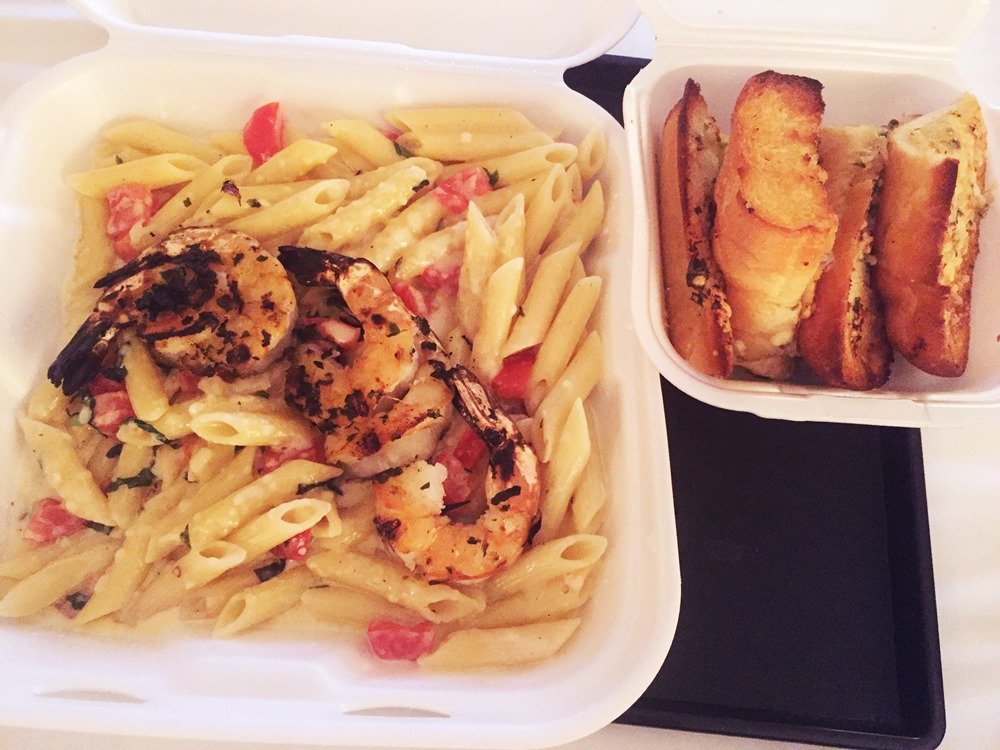 By the time I ate and watched my show, I just did my mani and pedi and settled down for the night since I had an early morning.

My video shoot went extremely well. The cameras and lights in my face was a bit overwhelming at first but I got used to it. This was my first time letting someone else do my makeup. She did a great job but I had to go back in and touch up my brows (I’m very particular about my brows). Aside form that, my face stayed flawless after the shoot until it was time to wash it off that night, and it was 100+ degrees an LA.  So kudos to my makeup artist.  Here is a sneak peek at my set… 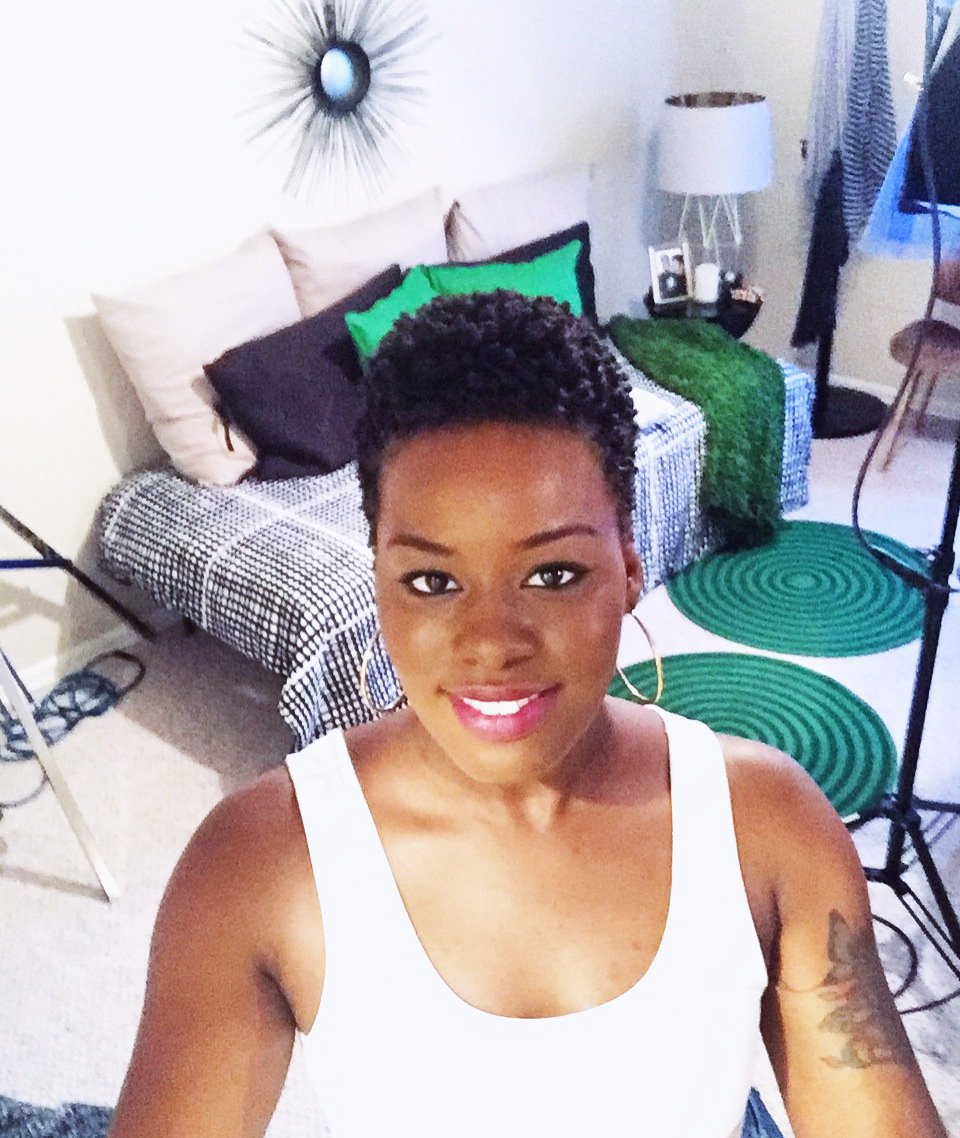 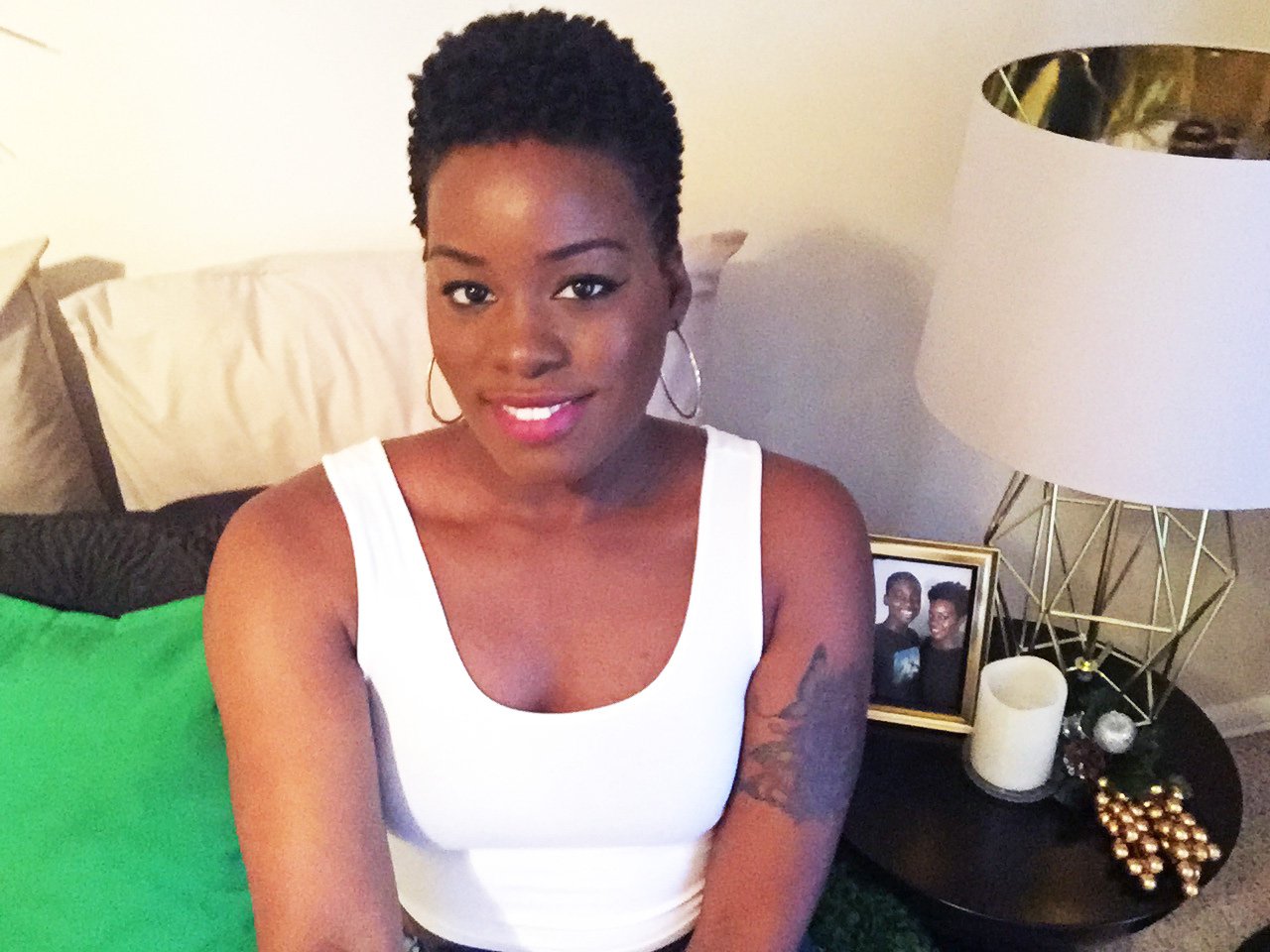 I finished shooting and then took an Uber back to my hotel to freshen up so I can head out to Hollywood. Speaking of Uber, when in LA you should definitely stick to Uber and avoid the regular taxis. I had to take a regular taxi to my shoot because of a mix up with my Uber, and it was 3x the amount I paid for the Uber returning to my hotel. I learned my lesson! If you don’t have an Uber account, sign up using code ericam127 and get your first ride free… and I’ll get a free ride as well for hooking you up. Sharing is caring. 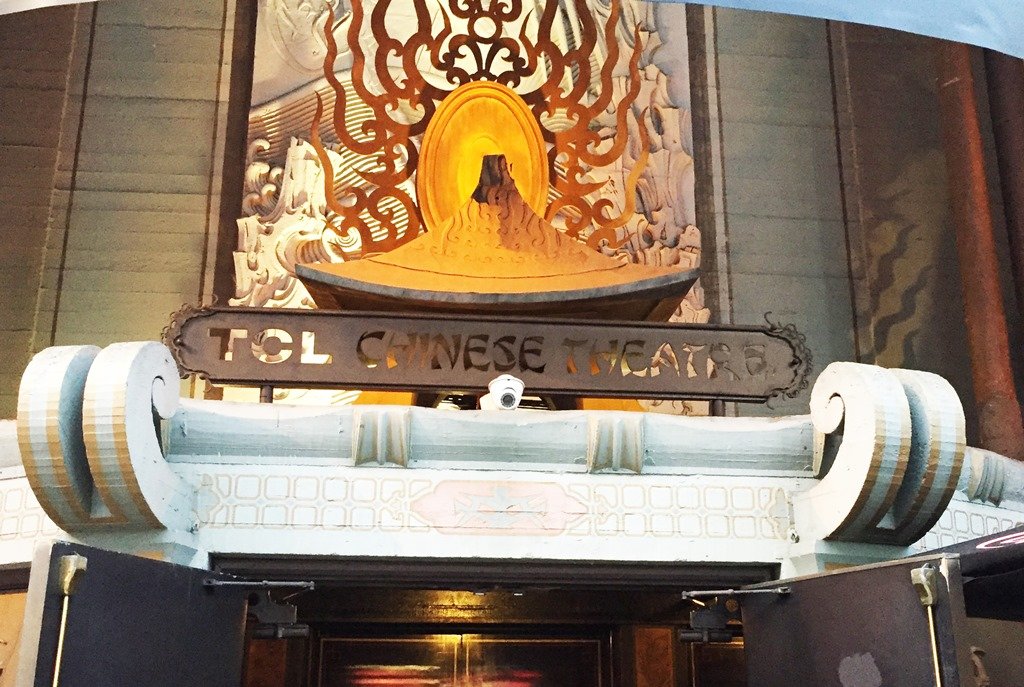 Anyway, my first stop on Hollywood Blvd. was the TCL Chinese Theater to see the famous signatures, hand and foot prints embedded in the concrete. 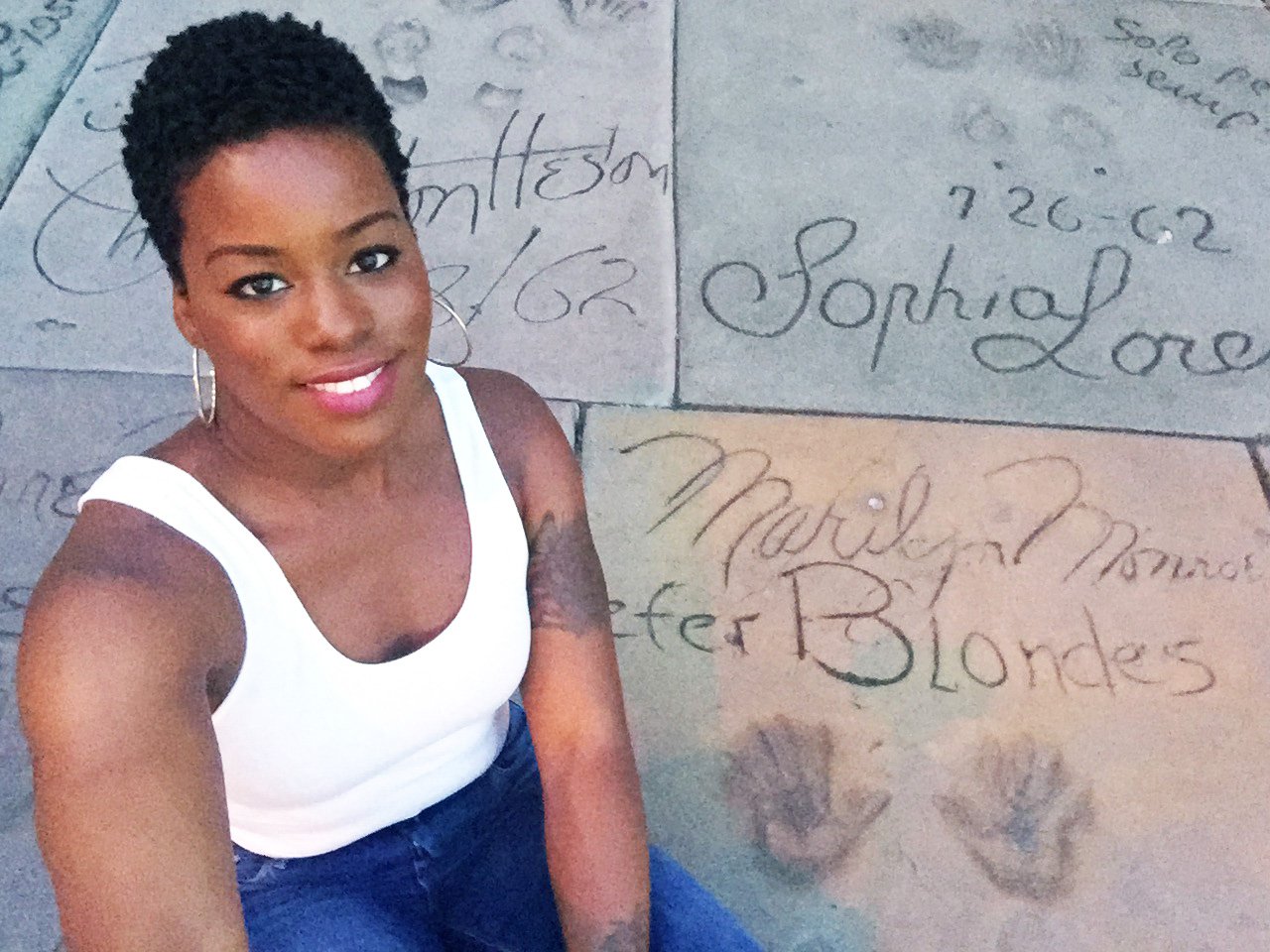 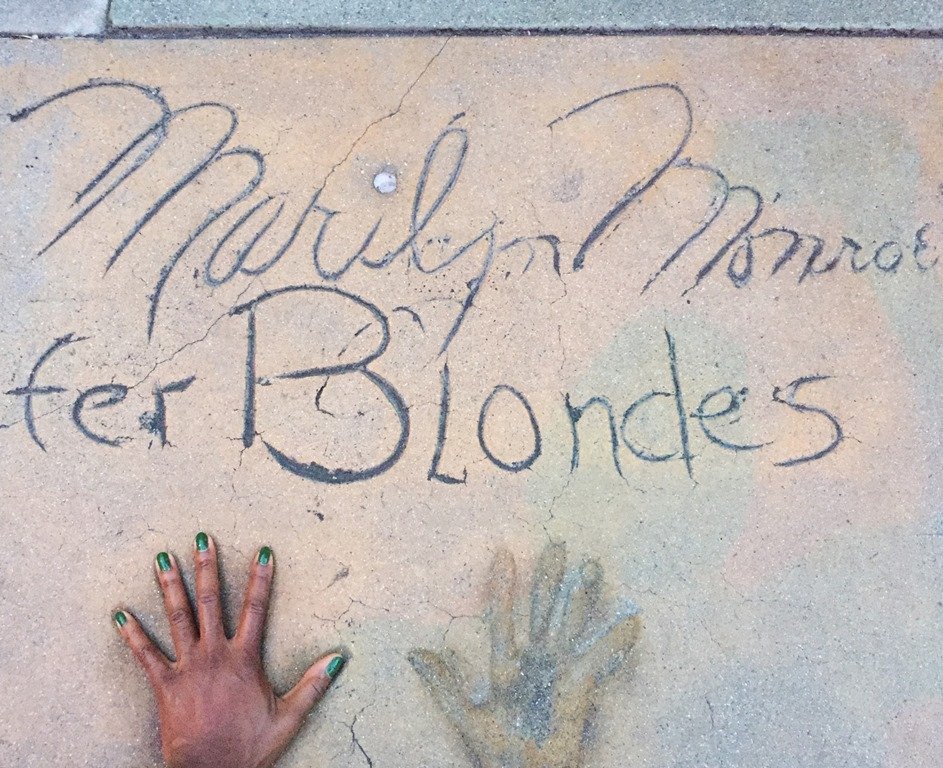 My hands are the same exact size as Marilyn Monroes’. 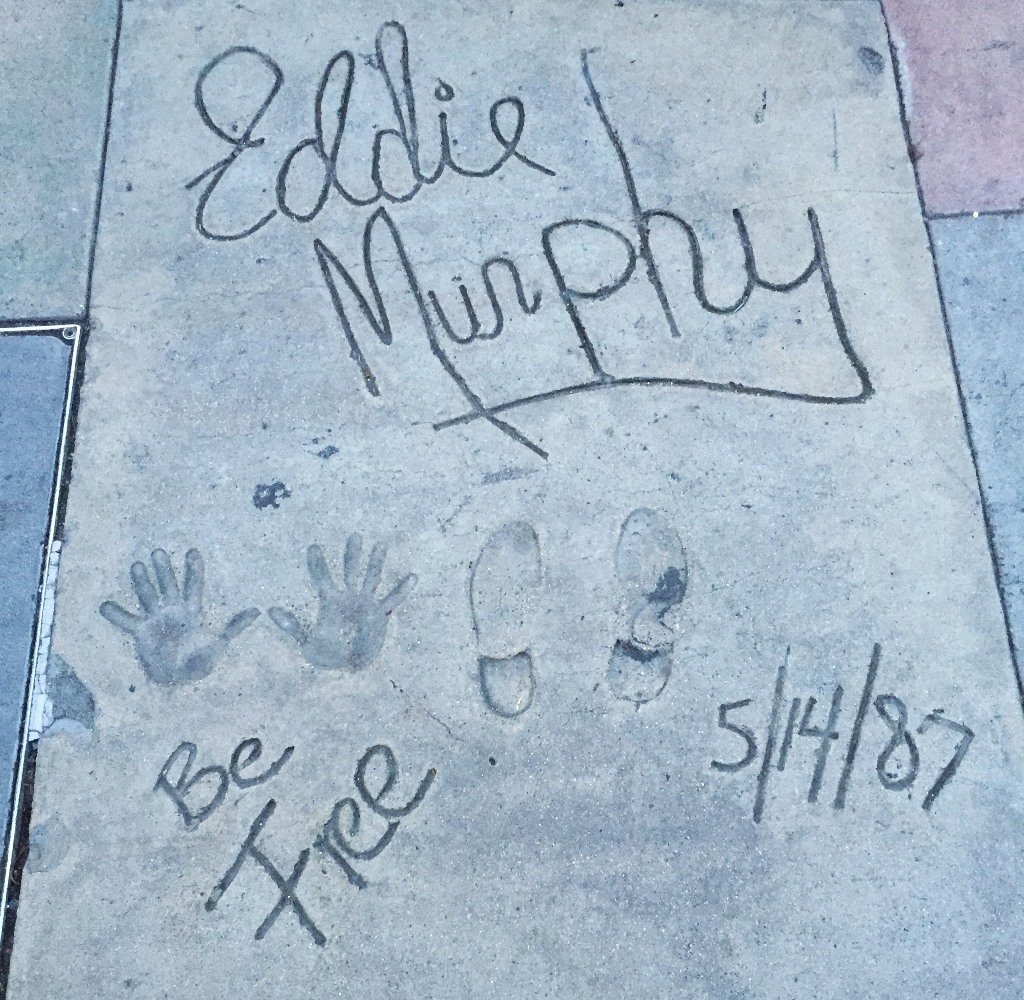 Of course I had to stop at some of the stars on the Hollwood Walk of Fame to take pictures. I wouldn’t be a real tourist if I didn’t lol. I was extremely happy to see so many black celebrities, especially women on the Walk of Fame. 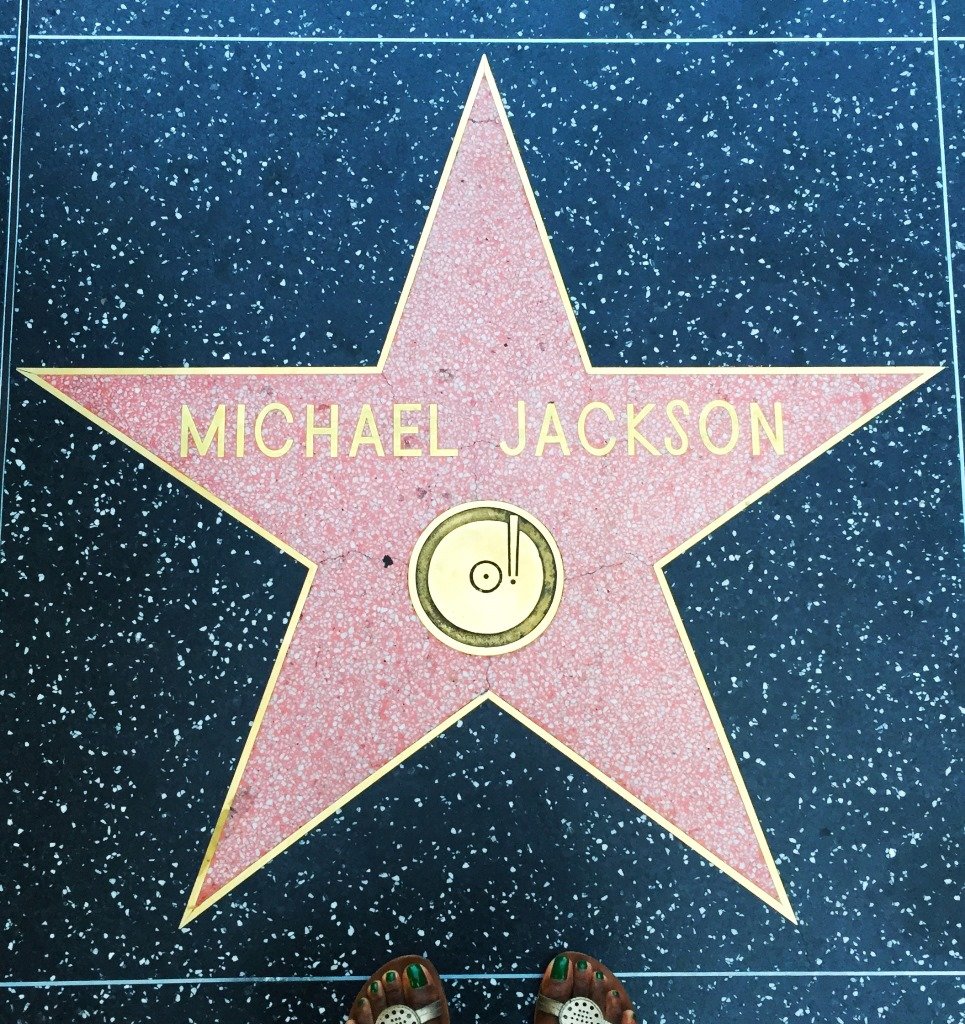 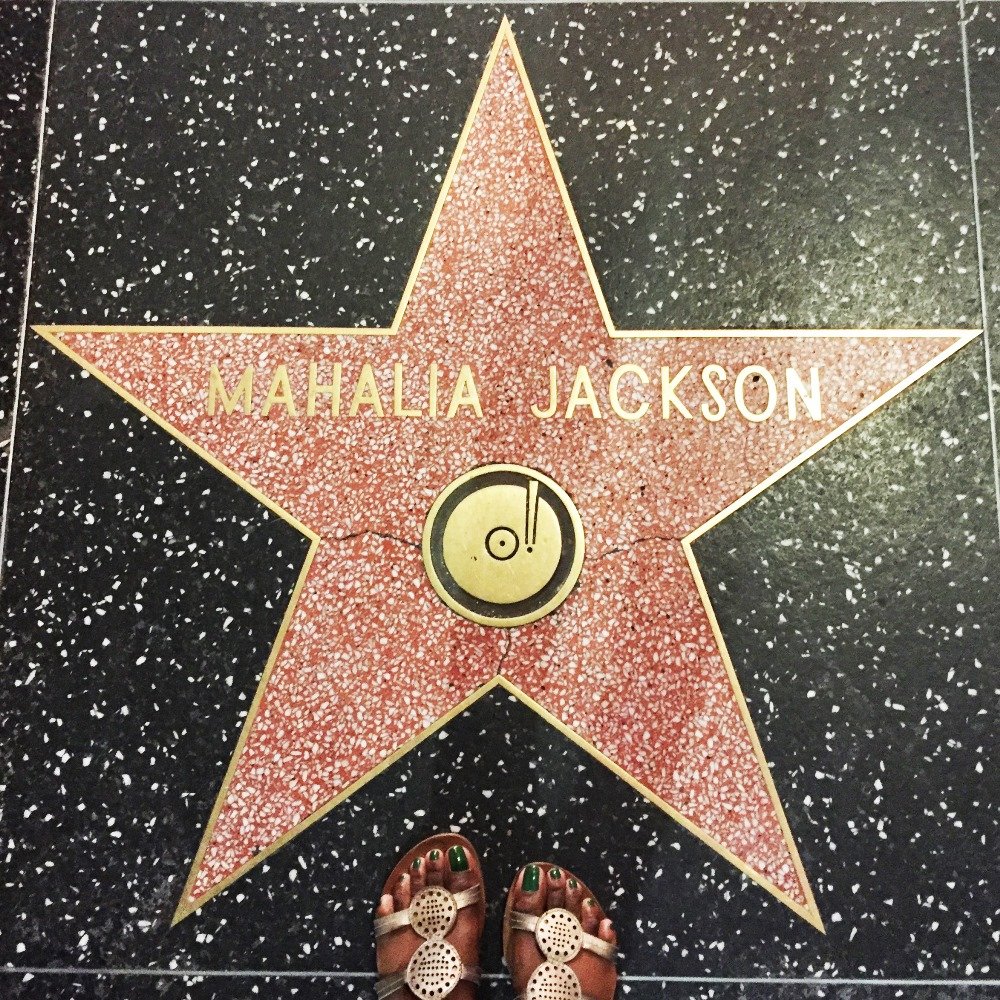 Hollywood Boulevard was very similar to Times Square in NYC. Although I was by myself, I never felt unsafe and actually felt right at home. The only annoying thing was all of the guys trying to get you to take their CD’s and being rude when you decline. I’m a New Yorker so I was used to that though. Here’s a few more shots of Hollywood Blvd. 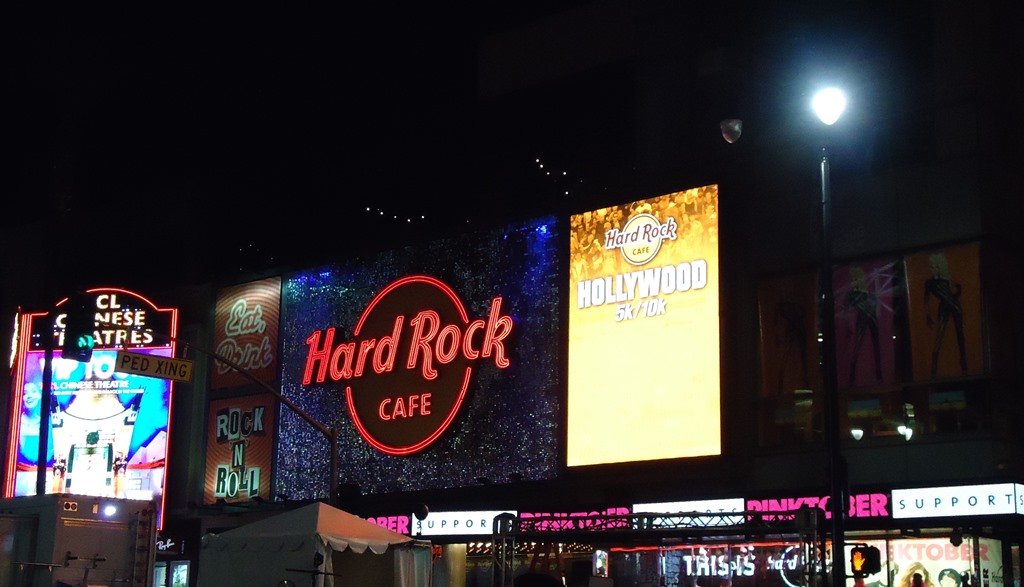 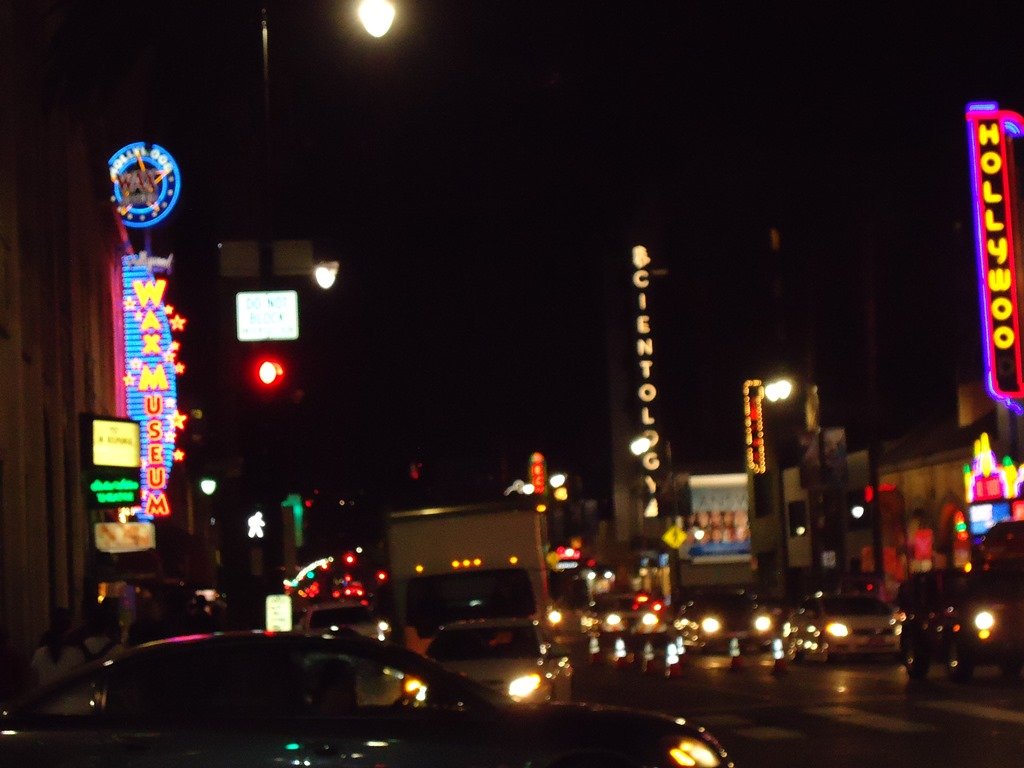 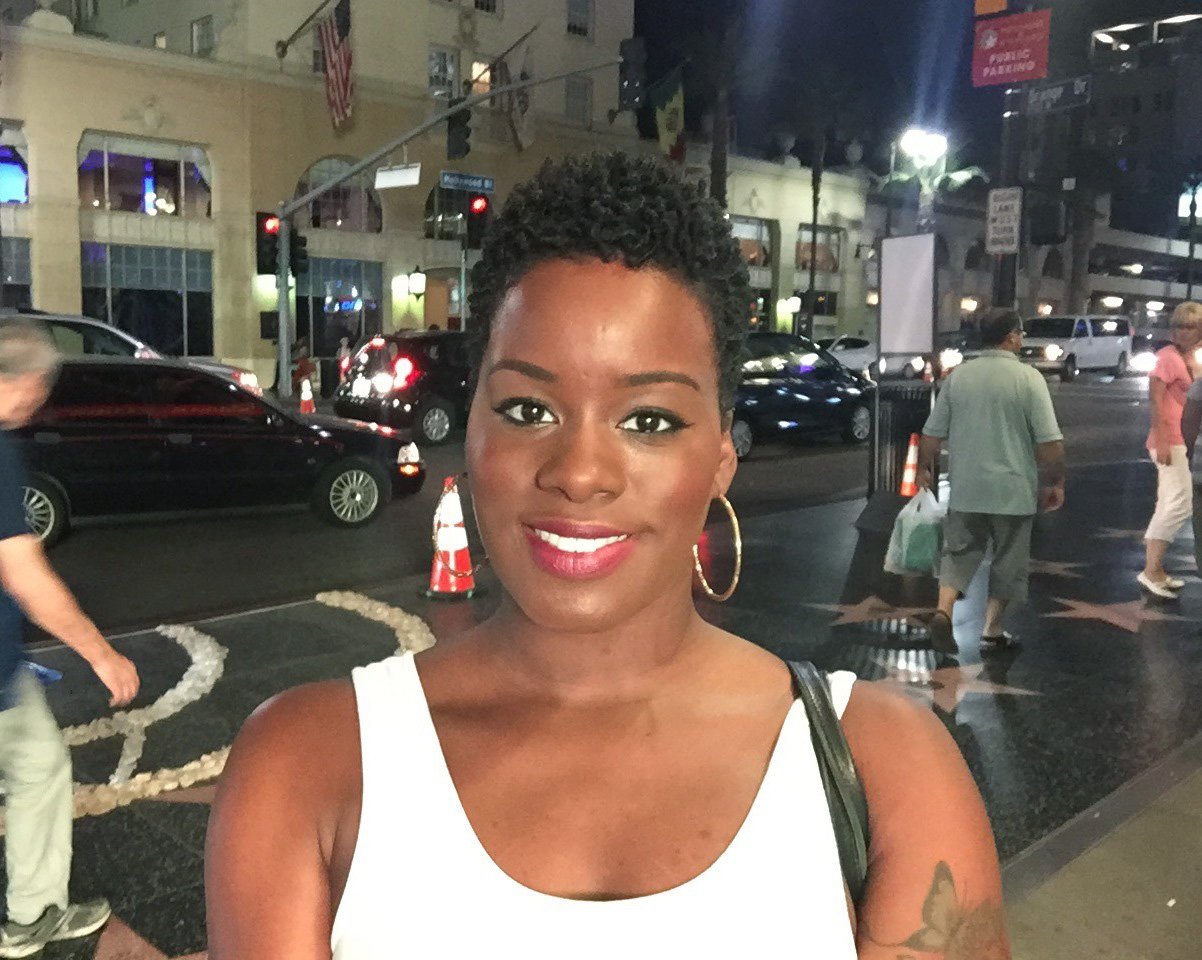 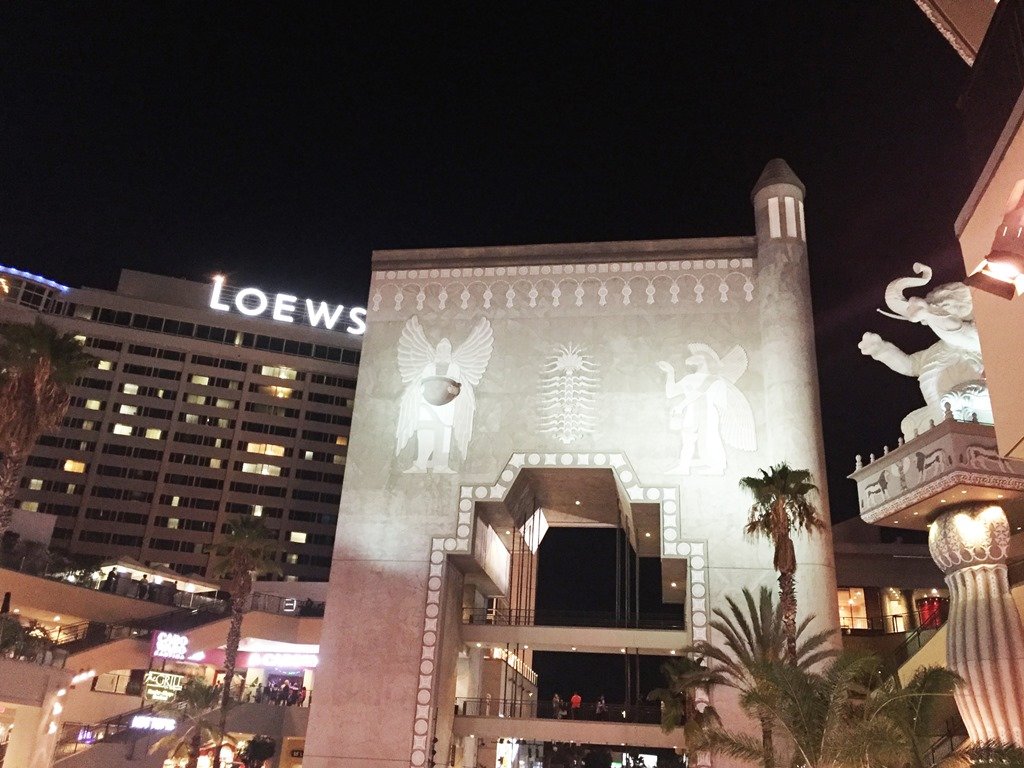 I heard that LA has some of the best sushi and planned to find a ritzy sushi restaurant, but last minute Pokinometry caught my attention so I decided to eat there. This is what Chipotle would be like if it were a sushi chain… 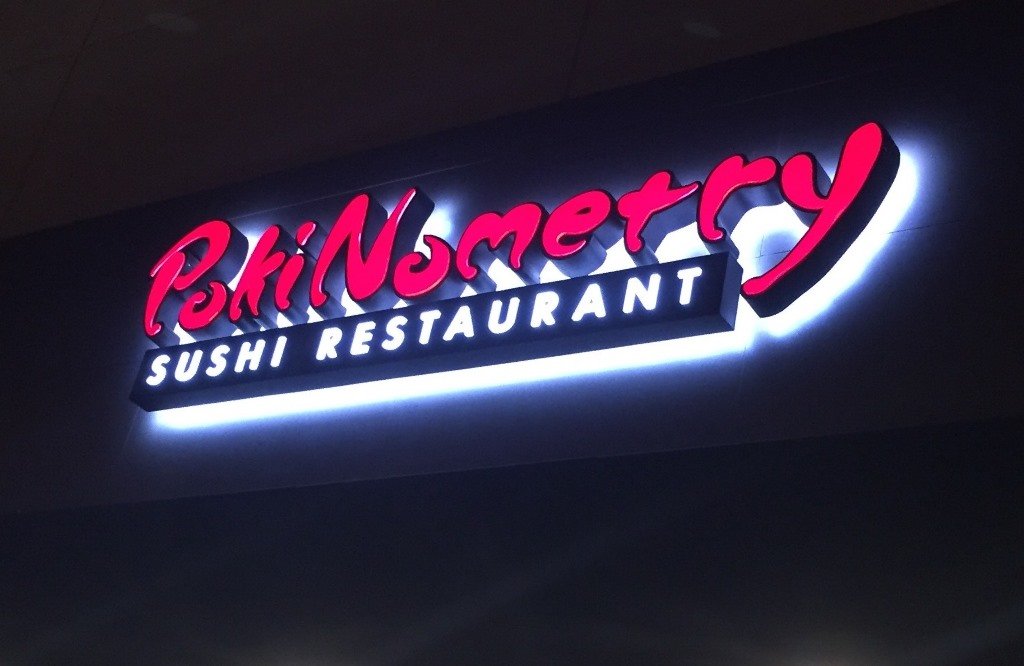 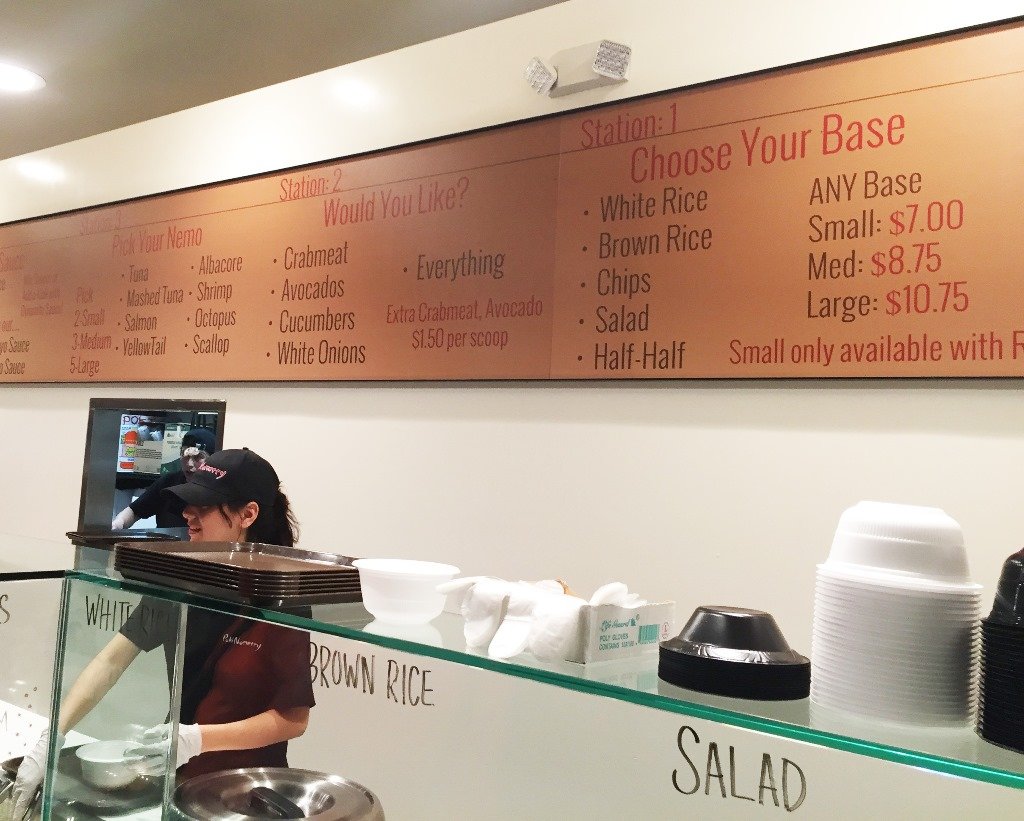 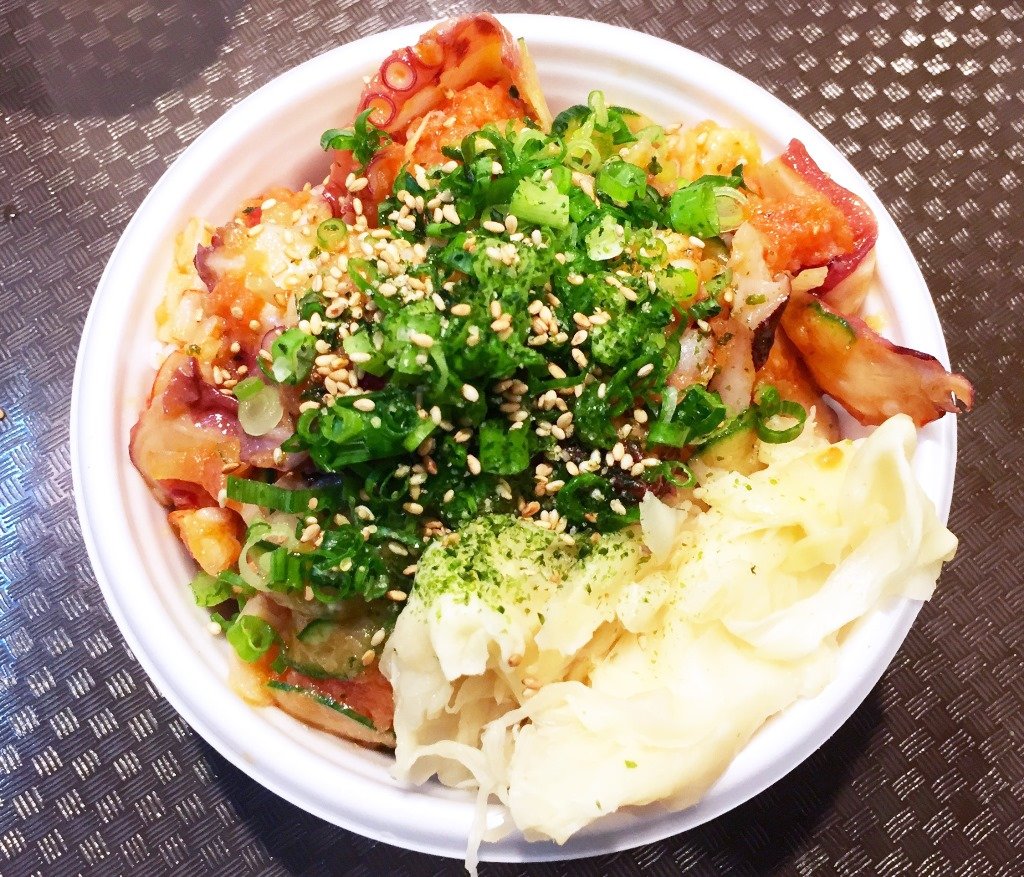 My sushi bowl was soooo good and I’m glad that I tried something different. It was huge so I could only finish half, but I took the rest back to my hotel with me and finished it off while watching How To Get Away With Murder. Yes I still watch my shows when I’m away, well at least I try to. 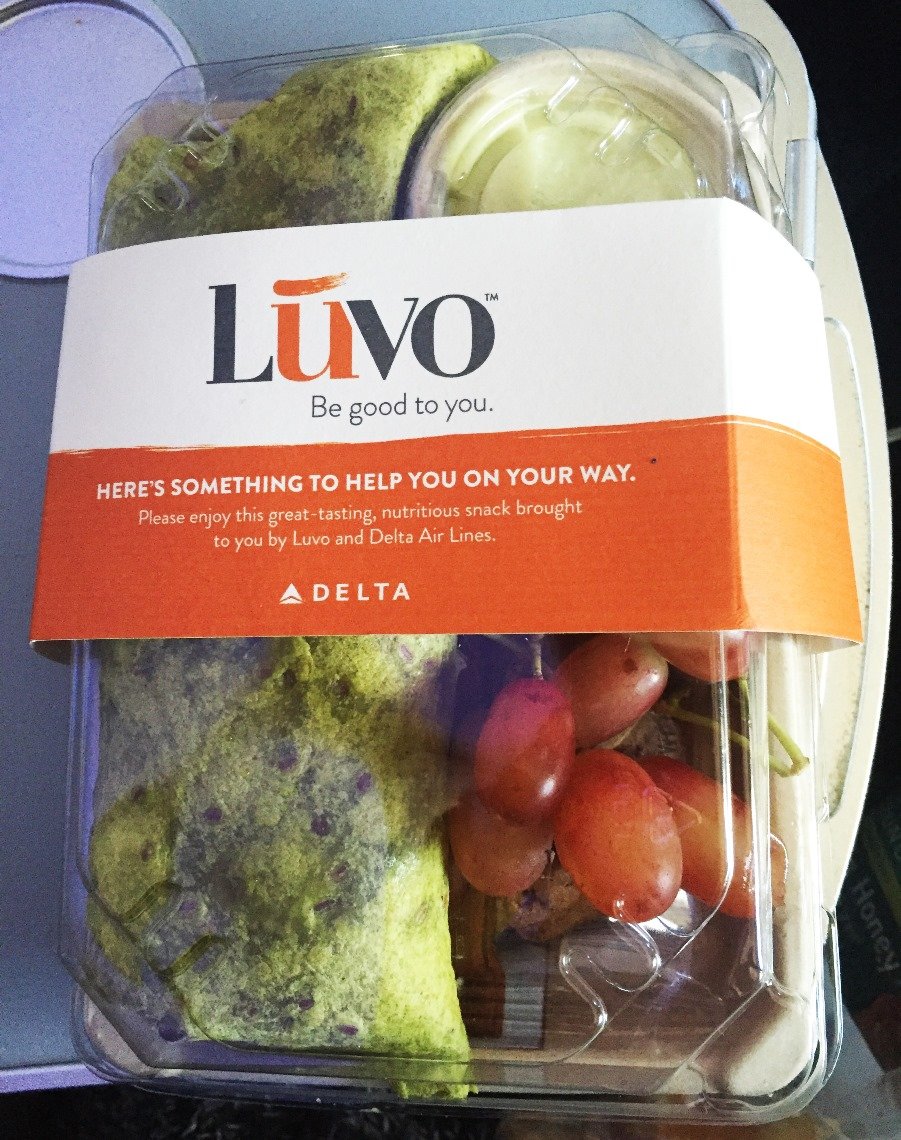 Speaking of food, I had an early afternoon flight and wasn’t too hungry so I didn’t eat much before I left. I was starving once I got settled into the flight so I tried new food again, flight food. This was my first time trying flight food and I expected it to be not so great, but I enjoyed it very much. I don’t know if it was because I was so hungry, but I couldn’t believe how good this Luvo Quinoa Crunch Wrap was. 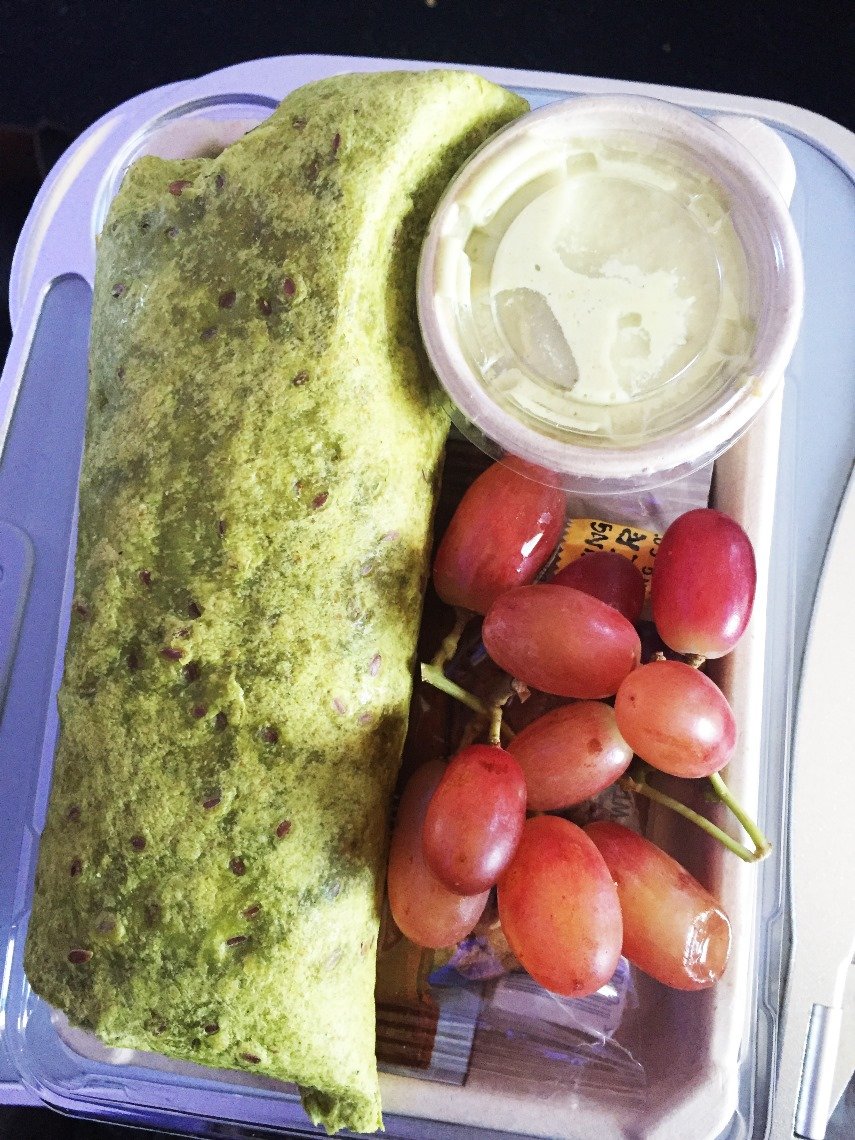 Crunchy vegetables, avocado, quinoa & black rice salad in a spinach flaxseed tortilla, served with edamame hummus and hot sauce. It also came with fresh grapes and a Coconut Chocolate Chip Cookie. I truly enjoyed this meal and definitely won’t hesitate to try flight food again in an emergency. It tasted like something that I would find in a fancy deli here in NYC… and the price was about that as well. 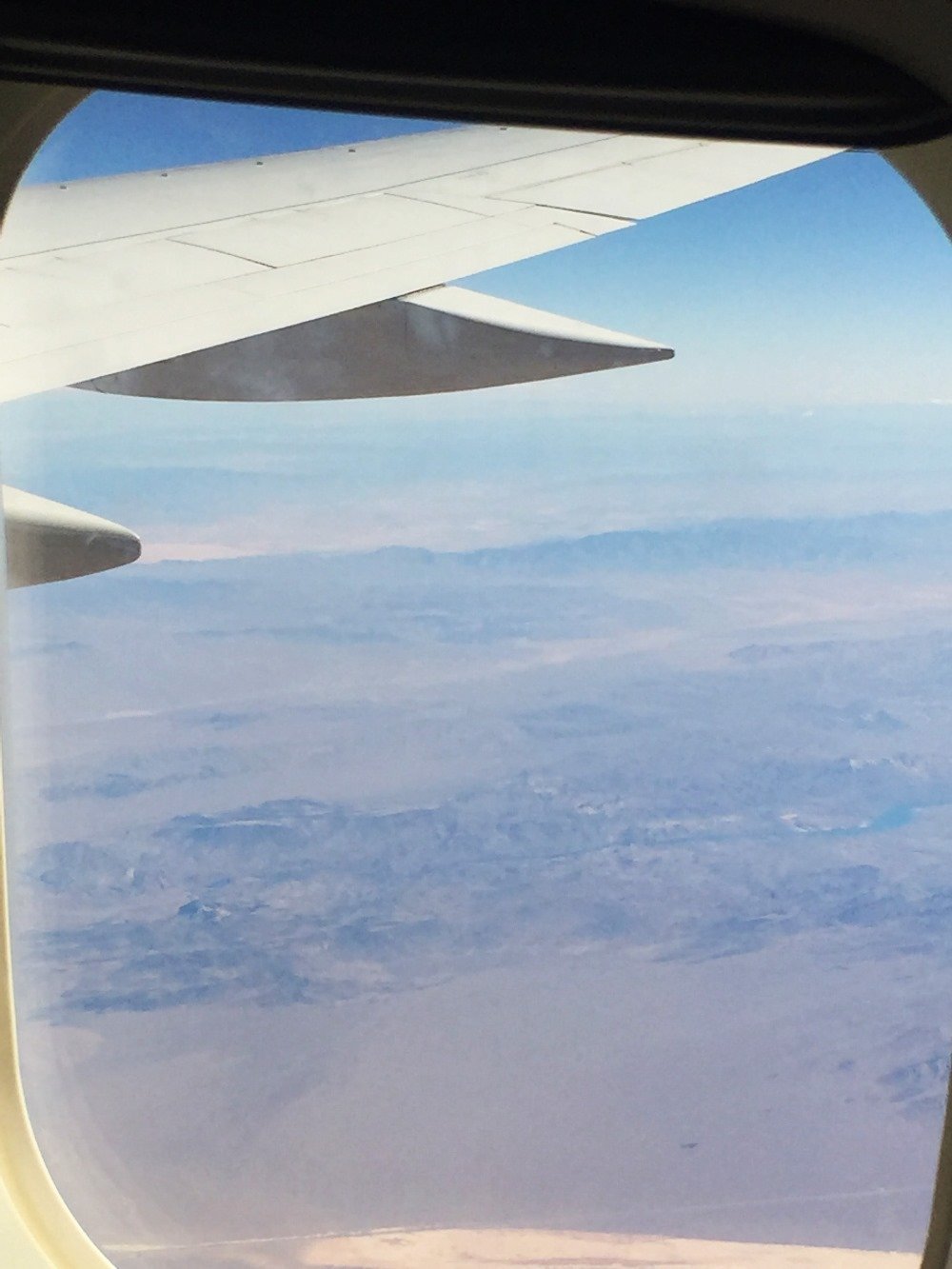 Although my trip was very short, I still enjoyed LA  (I went back to LA for 5 days and took my son). This was my first time traveling so far from home solo and I will definitely be doing this more often. I enjoyed the time alone and being able to plan without consulting others. Check out more pics the slideshow! 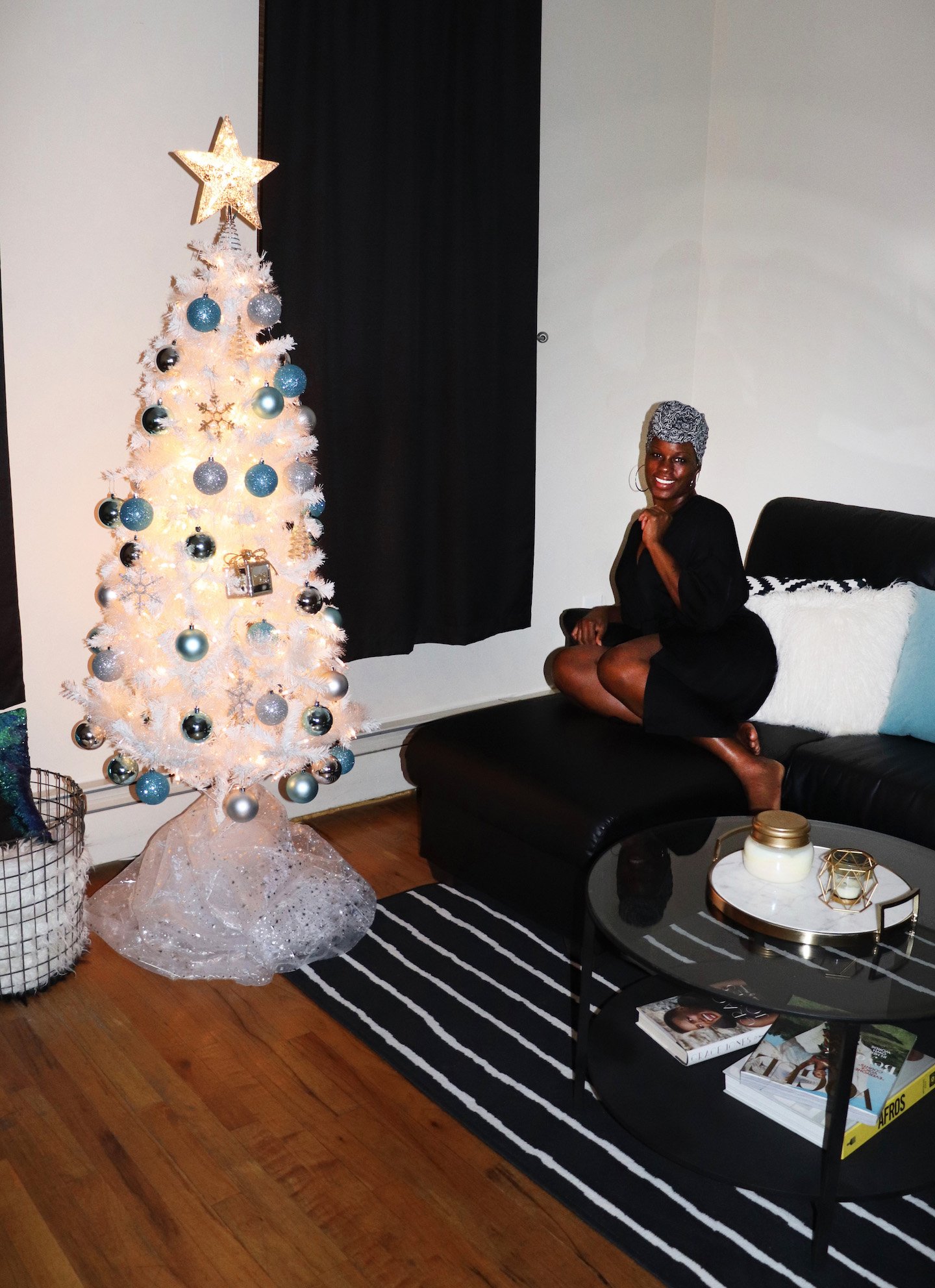 How To Create A Stylish Christmas Tree Without Breaking The Bank 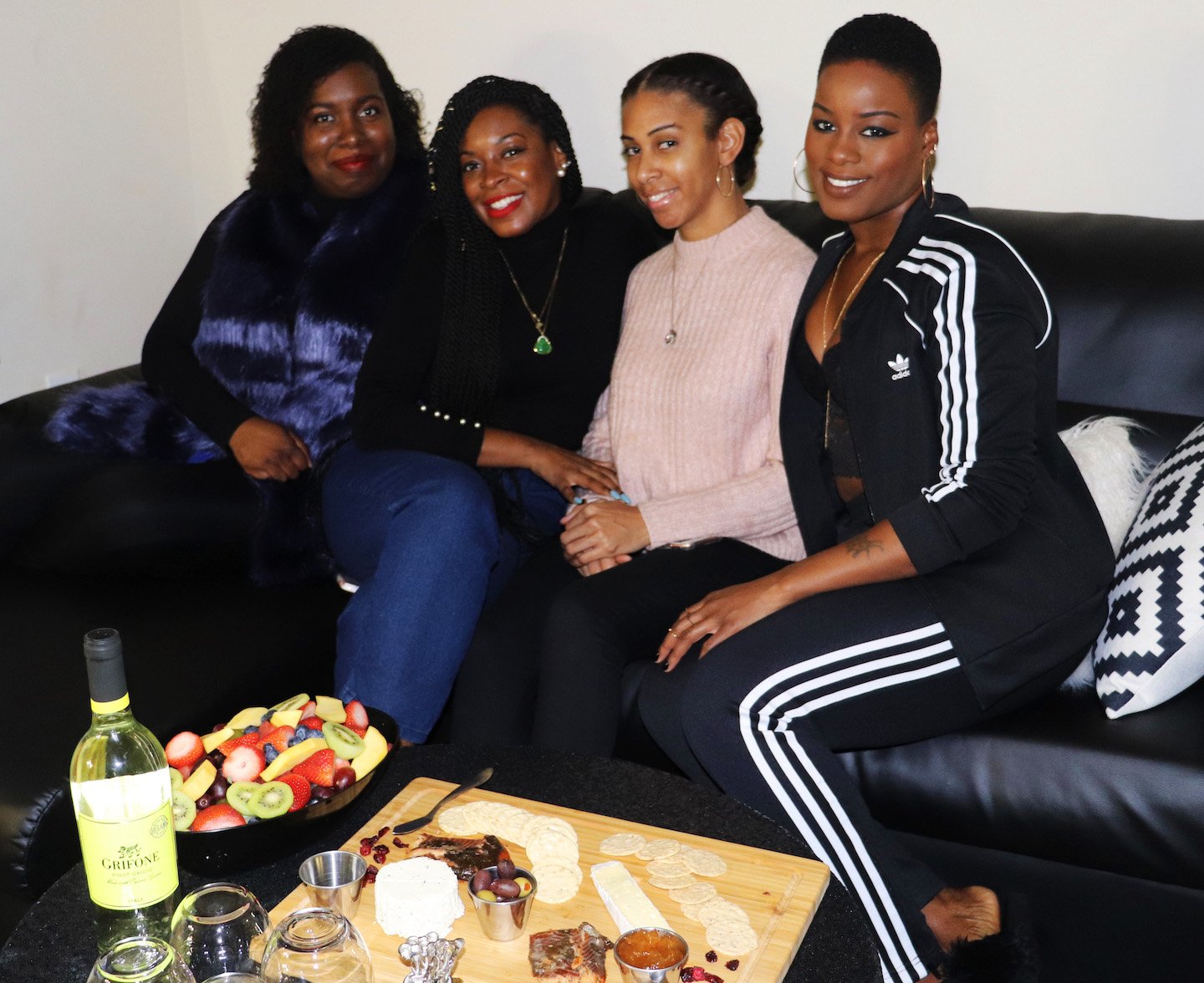 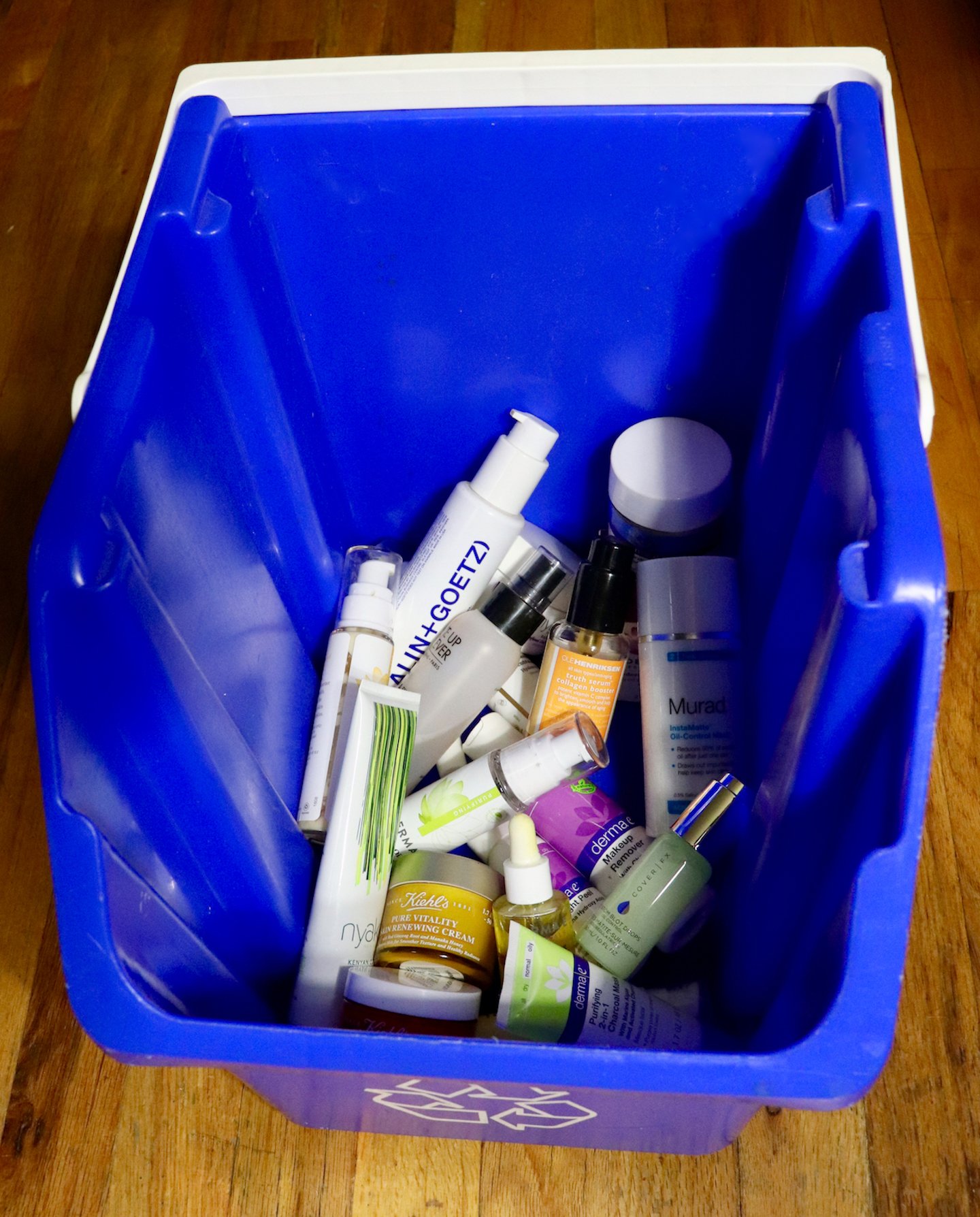 Toss Your Expired Skincare & Try These 10 Products For Flawless Skin 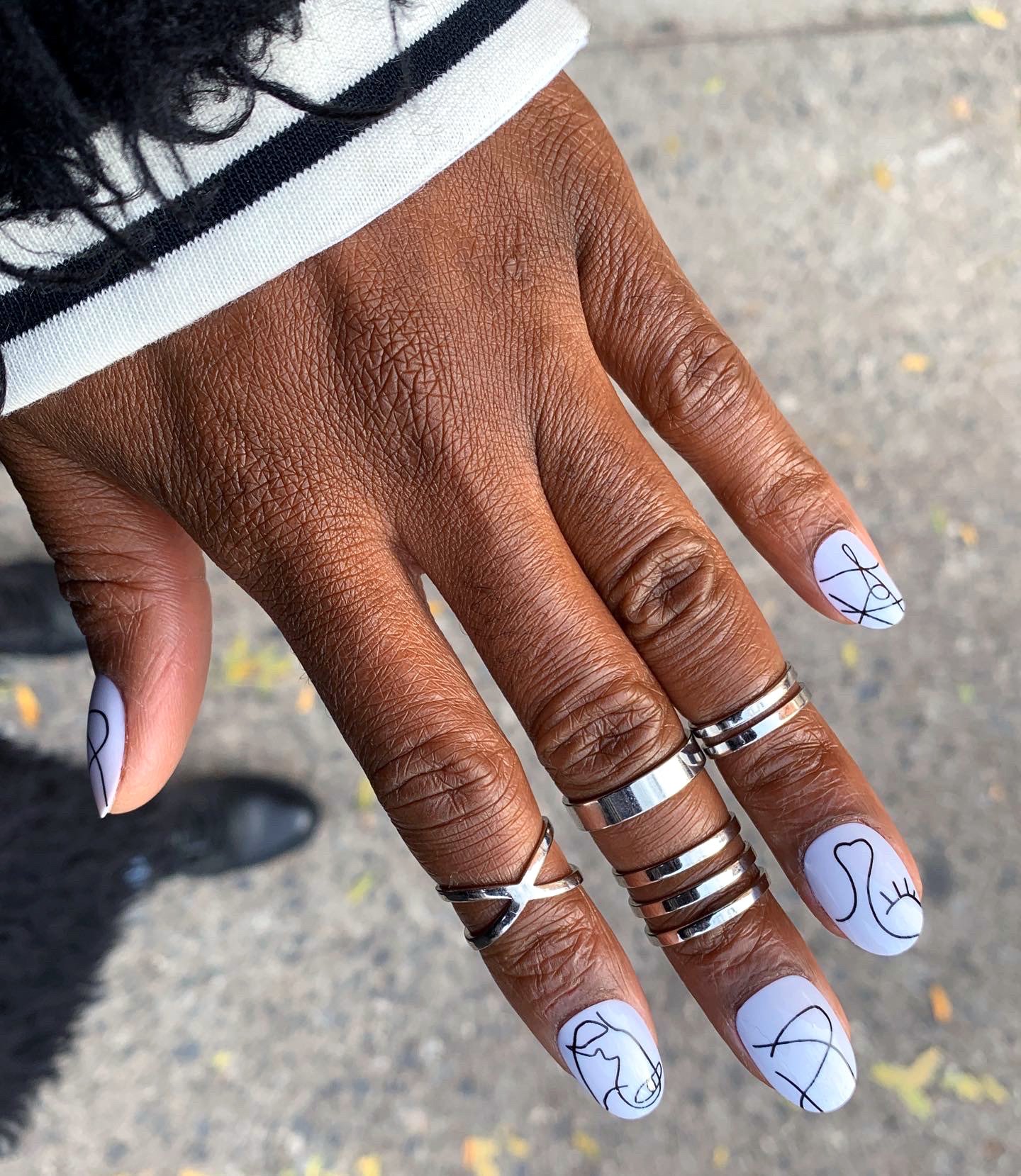 Fake It ‘Til You Make It With Predesigned Press Ons